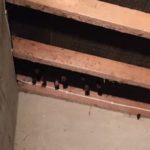 We have recently been instructed to seek Planning Permission to convert an Outbuilding to form an Annexe.  When surveying the existing structure, the presence of bats was noticed.

On further examination by an Ecologist the bats have been identified as Lesser Horseshoe Bats, which are extremely rare; it is believed the bats use the outbuildings as a maternity roost during the summer.

Measures have therefore been proposed to maintain the presence of the bats during summer months. With the works being carried out in the winter months and the provision of bat roost access to the lofts of the proposed Annexe.

As part of our role as Architectural Designers we’re becoming more and more involved with biodiversity and it’s a pleasure to include such measure when involved with building projects.